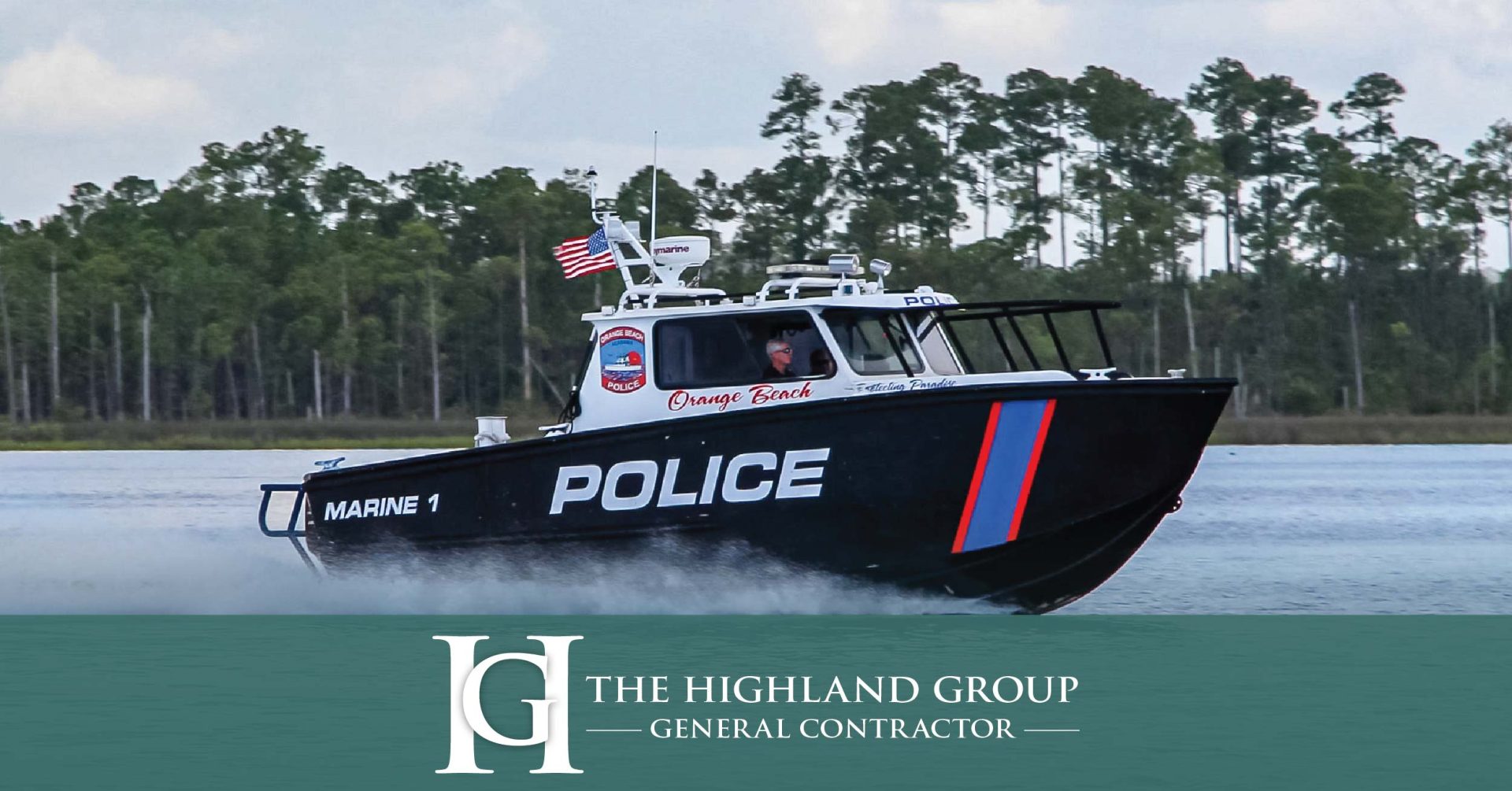 November 9, 2022 (Orange Beach, AL) – The Alabama Law Enforcement Agency (ALEA) has named The Highland Group, a real estate development and commercial construction firm, as the general contractor to complete a major remediation project to the Orange Beach Marine Police facilities in Orange Beach, Alabama. While much of the damage was due to Hurricane Sally, Ryan Long, Vice-President of Preconstruction Services, has been working closely with local officials to identify their needs and provide a program to upgrade these facilities. “This facility is a key asset to The Orange Beach Police Department as well as other local law enforcement agencies, and the service these officers provide remains critical to the enjoyment of all who visit the area,” according to Long. “Public Safety is the number one priority for the City of Orange Beach and this investment shows our official’s commitment to that cause.”

It’s Highland’s privilege to assist the Orange Beach Marine Division in getting their facilities back into form and functioning properly again. The Highland Group is always proud to serve its local law enforcement agencies in their efforts to keep their communities safe and secure. Construction is set to get underway soon with a total cost estimated at $2 Million and is expected to be completed by Spring 2023.

The Orange Beach Police Department’s Marine Division serves the city by enforcing municipal ordinances to approximately 69 miles of running water coastline on the inland bays, bayous, coves, and estuaries of Orange Beach. Their patrol also includes 7 miles of coastline directly on the Gulf of Mexico extending out 1.2 miles to sea. The Marine Division serves as a key factor in keeping the Gulf Coastline secure, providing safety and calm waters to the citizens of Orange Beach. The Orange Beach Marine Patrol is a division of the Orange Beach Police Department and serves a key role in The Alabama Law Enforcement Agency’s Marine Patrol (AMP) division.

The Alabama Law Enforcement Agency’s Marine Patrol (AMP) division has served its communities for nearly three decades after being founded in 1993. Its mission is to enhance safety and promote the responsible use of resources on Alabama’s waterways through enforcement, education, and community activities. With Alabama’s favorable weather conditions and abundant waterways, boating is a popular activity across the state. Over one million boaters enjoy Alabama’s one million acres of lakes, 1,600 miles of rivers, and 53 miles of coastlines each year.

About The Highland Group:

The Highland Group is a real estate development and commercial construction firm that specializes in real estate development, preconstruction services, general contracting, construction management, and design-build delivery. Their mission is to develop leaders committed to higher standards who have an impact on their firm and the communities in which they work and live by developing trusting relationships and building quality projects. The Highland Group has offices located in the Gulf Coast Region (501 South McKenzie Street, Suite 2, Foley, Alabama, 36535), the Tennessee Valley Region (415-H Church Street NW, Suite 201, Huntsville, Alabama, 35801), and the Florida Panhandle Region (130 Richard Jackson Blvd., Suite 104A, Panama City Beach, Florida, 32407). They have been proudly serving clients throughout the Southeastern United States since 2005. Learn more at www.HighlandGroup.org