The Highland Group has Received Two Excellence in Construction Awards 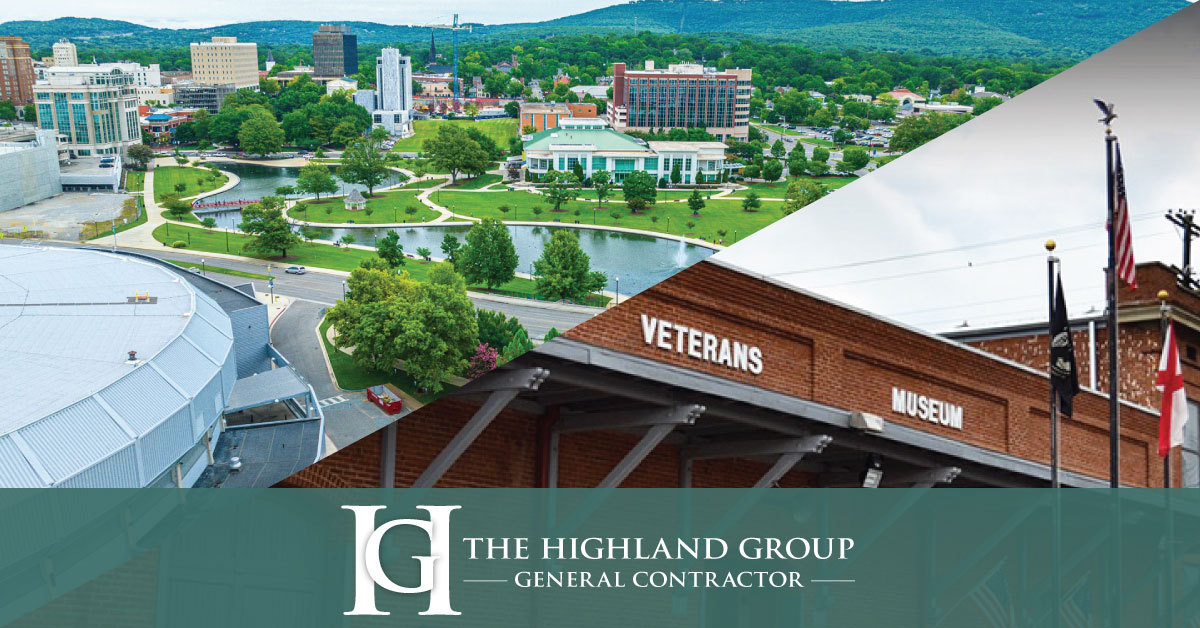 September 26, 2022 (Foley, AL) – Scott Shamburger, President and CEO of The Highland Group, the leading real estate development and commercial construction firm, has announced today that his firm has received two Awards of Merit from the Associated Builders and Contractors (ABC) trade association’s North Alabama chapter. The association grants these awards to industry leading projects as a mark of high quality and recognizes the outstanding professional service provided by the organizations that managed them.

In late 2021, The Highland Group was contracted by the City of Huntsville and the Von Braun Control Board to update the nearly 50-year-old Von Braun Center (VBC) Propst Arena’s backstage area for the 21st century. The final scope of the project came out to nearly 13,000 square feet including 4,800 square feet of new construction, and 8,200 square feet of renovations to the existing back of house support spaces. During the construction of this project, the firm also had to take into consideration the ongoing event schedule for the arena and time their renovations accordingly. The project began in December 2020, lasting until spring of 2022, with occupancy of the event center beginning in October 2021 to accommodate several large events planned that year.

“Growing up as a Huntsville native, a majority of my childhood was centered around the Von Braun Center with the arena hosting hockey tournaments, arena football, as well as my high school graduation. This facility had a huge impact on me as a child, so it was very personal for me to be able to continue the legacy for future generations with our addition and renovation” said Senior Vice President of North Alabama, “This fast-paced project was really put to the test from a supply chain standpoint as it was during the peak of Covid. However, with an exceptional team from the architecture firm, City of Huntsville, and the Board of directors at the VBC we were able to finish the project in time for their concert season.” Barnes said.

The completed project showcased the creation of six stunning dressing rooms, two private star lounges, four spacious locker rooms, a catering and media room, office space, a commercial grade laundry room, and a VR Training room for visiting sports teams. The renovations also included the installation of new lighting elements, paint, replacing ceiling tiles, refurbishing entrance doors, updating flooring and the creation of new directional signage. Highland’s goal for the project was to create not only an elegant backstage lounge for artists and athletes alike to relax in between performances, but to build a utilitarian space for any arena guest to enjoy for the foreseeable future.

The Highland Group’s Huntsville team was contracted by The Alabama Department of Veteran and Military Affairs in conjunction with the Limestone County Legislature to expand and build a new facility for the Alabama Veterans Museum and Archives in Athens, Alabama. The museum opened 20 years prior on November 10, 2000, with just two small rooms, and after a long period of growth the museum needed more space to better showcase its collection. The construction of the new facility started at the beginning of November 2020 in conjunction with the museum’s 20th anniversary and concluded with the location’s grand reopening, with a ribbon cutting by Governor Ivey, in January 2021. Construction for the project also entailed interior renovations to the existing Limestone Event Center, the creation of interior directional informational signs, and some demolition to the previous building the museum was moving into. The completed expansion, of 20,000 square feet includes a new archival library, a large museum space to store the growing historical collection, a gift shop, and meeting space to hold monthly events, and an area for veterans to get together and share their stories.

When asked about the construction efforts and the efforts of his team after receiving news of their upcoming awards, Michael Barnes said “It is very humbling to receive an award that recognized not only us as the contractor but the entire team that played a role in bringing this project successfully across the finish line. When we started the project, we quickly realized how anticipated this was for the community as well as the state. Many veterans came to tour the facility and many of them share their stories with our team It is an honor for our team to provide a place for their stories to be told for years to come.”

The newly constructed facility provides the museum with 20,000 square feet of space for future growth. The larger space allows the museum staff to bring out additional artifacts for display now that they are free of the limitations of their previous location. The museum is one of the top tourist attractions in Limestone County and after Highland’s renovations, it’s poised to become one of the top in the Southeast.

The Highland Group is proud to have received such high honors and recognition for their construction efforts last year. The awards will be given to the group’s Huntsville team at the ABC North Alabama Chapter’s 19th annual Excellence in Construction Awards celebration at the Jackson Center in Huntsville, Alabama on Thursday, December 1st.

About The Highland Group:

The Highland Group is a real estate development and commercial construction firm that specializes in real estate development, preconstruction services, general contracting, construction management, and design-build delivery. Its mission is to develop leaders committed to higher standards who have an impact on their firm and the communities in which they work and live by developing trusting relationships and building quality projects. The Highland Group has offices located in the Gulf Coast Region (501 South McKenzie Street, Suite 2, Foley, Alabama, 36535), the Tennessee Valley Region (415-H Church Street NW, Suite 201, Huntsville, Alabama, 35801), and the Florida Panhandle Region (130 Richard Jackson Blvd., Suite 104A, Panama City Beach, Florida, 32407). They have been proudly serving clients throughout the Southeastern United States since 2005. Learn more at www.HighlandGroup.org